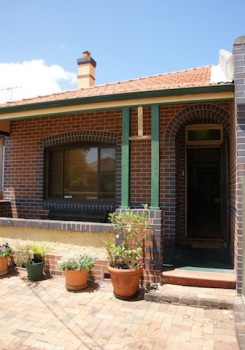 As I bought it.

Given it’s a Federation semi, there wasn’t a whole lot I could do to improve the facade without breaking the DIY bank. The original windows had been replaced with brassy olive thin aluminium windows. Who knows why. That in itself was the major sticking point for me. I really, really dislike them. Really.

They jar with the original character of the house and are just plain ugly. They take away some of it’s identity and charm.  Unfortunately, replacing them was going to be a [very] long-term project.

There were a few “issues” I had to contend with when figuring out what to do. Firstly, the side driveway was made when cars were a lot narrower than they are today (either that or something went wrong during building). I could just squeeze my little hatchback down there, but forget about actually getting out of the car! Therefore, using the drive was out.

Secondly, the house is on a main road with a clearway from 3pm-7pm meaning I couldn’t park out front. The only place was in the very tiny front yard. Hence why the original owners had  paved it from head to toe. 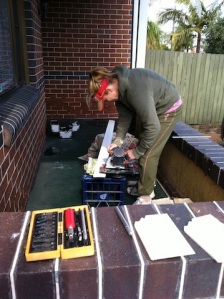 I started on the facade, as that was easier!

It’s west-facing so the verandah posts and timber work took the brunt of the baking afternoon sun. The paint work wasn’t maintained and had flaked, allowing water to seep in and start rotting the timber.

After scraping off the flaking paint, ensuring the damage was only superficial and not structural and sealing the rotting areas, I decided I wanted to add a skirting around the base of each post. This would add some more character plus provide additional protection.

I bought some external grade decorative timber and set about mitering (cutting at 45 degrees to form 90 degree angles) four pieces for each and securing them in place. Please note – I wouldn’t recommend using milk crates as your workbench as I have done here!

I also removed the rotten T-bars that were between the two uprights and replaced them with different fretwork pieces. These are readily available from your big hardware stores, it’s just a matter of deciding which to go with. I kept it simple. 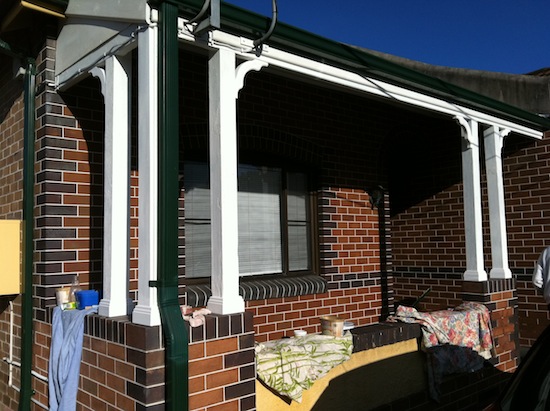 After that, it was time to, once again, cover up the bottle green and yellow. I kept it fresh white with a very simple light grey trim detail. The fence, which had been painted olive green to match who knows what was also painted grey.