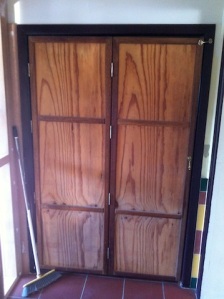 The old laundry door – had to go!

The vestibule area was an unusable space. I had grand plans to eventually re-work this whole space so all I could try to do was lighten and brighten and make its usability more friendly. The previous owners had built a single bi-fold door for the laundry area that, would flap around should there be a window or door open. It was bulky and well, ugly don’t you think?!

I decided to whip up a PAIR of bi-folds which would not encroach into the space when open and also meant quick, single-sided access to the laundry. I decided this on a wet and cold weekend when the only space I had to work in was the vestibule area itself. Not a great move.

New bi-folds in the making. One already hung.

Anyway using just two planks of engineered pine, a few hinges and some mind-numbing calculations, I managed to pull it off. It was the calculations that took the time and energy – the door frame was crooked to start… joy of joys.

My trusty work boots for the day, the humble slipper (which I don’t recommend either BTW!) took a battering from the sawdust but hey, my feet were warm.

The laundry had also been given the Nandos lovin’ so it fell victim to the white-out treatment – a complete and utter blanket of white paint from floor to ceiling. I didn’t bother prepping the tiles so that the paint would adhere for years to come as I knew they’d eventually be coming out. This saved time and more money. It was the smallest area to work in and drove me batty trying to fit the ladder in to get to the ceiling. 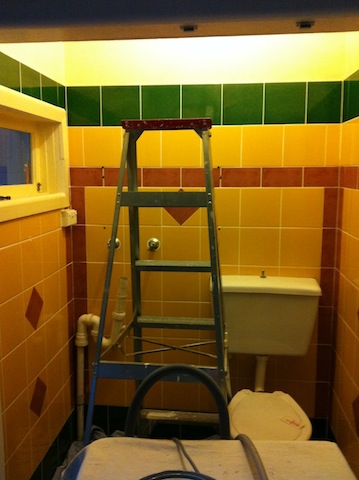 This outlook did nothing to encourage doing more laundry 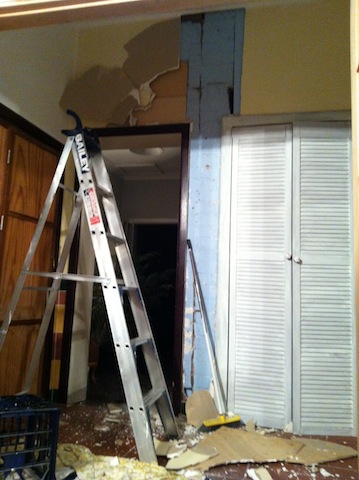 The plaster work on the original back wall of the house was dodgy. My only option? To rip it out.

In doing that, I discovered the original layout of the back of the house. The circular brick framing above the current doorway indicated it was a window. The original back doorway was fashioned into what was now the “linen press”.

Pity the bricks were painted blue had been cut otherwise I would have left them exposed. Beautiful solid bricks they were too.

So as a quick-fix, I applied a thing veneer of plywood over the various levels, gaps, bumps and bruises. Again, this was to eventually come out so it was all smoke and mirrors at this stage. 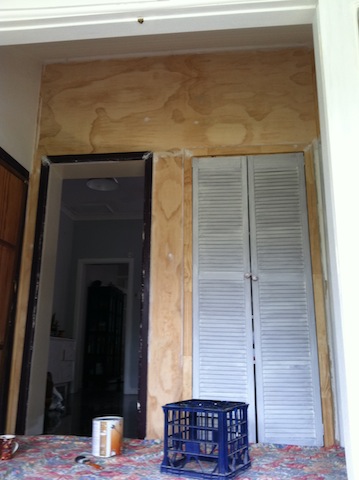 And after a lick of trusty white paint, it looked fresh, new, clean and presentable. I was happy. 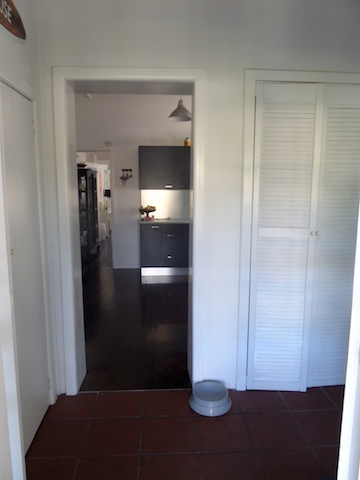 Looking from the deck back into the house – fresh and clean. 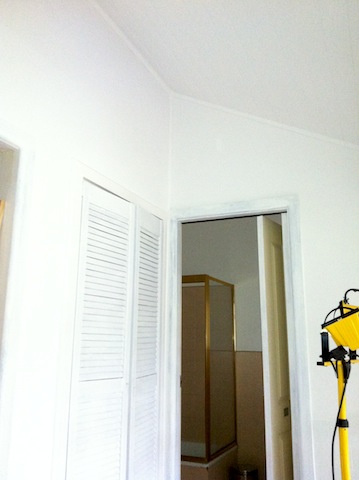 The original yellow ceiling was now white and gave the impression of greater height and space. The standard bathroom door was also replaced (professionally) with a bi-fold so that it too didn’t encroach on the space 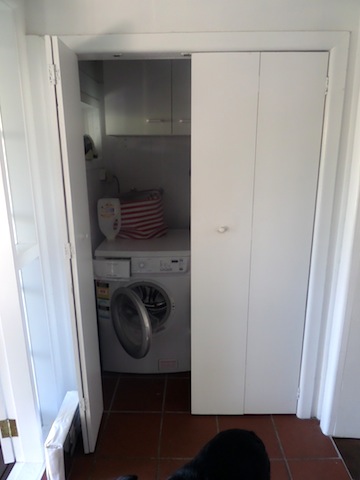 My new bi-folds and a very white laundry. It’s amazing how such simple changes made it look so much different