The bricked-up fireplace had been opened up again, the hole in the floor covered and the wall patched but my work here was just beginning. The trims needed to be freed of the hideous maroon stain/paint and the ceiling and walls were flaking. Oh and a cast-iron fire surround and mantle needed to be sourced. Deep breaths…

I was putting in a good 4-5 hours a night after work to keep things moving along. Sections of the ceiling were flaking and in some places was coming off back to the original horse hair plaster. It was a vast area and fiddly mainly due to working around the ornate mouldings not to mention a pain in the neck… literally! But it needed to be done.

Small section of the ceiling

Then came the walls and the trims. With 12 ft ceilings, it was a big area to cover. Virtually every square meter had nicks and chunks that needed to be patched and sanded before the paints even came out of the shed.

Painstaking patching, but well worth it.(Excuse the outfit…I was freezing)

But there was one little positive in this disaster zone: a handful of complete original tiles discovered behind the bricks blocking up the fireplace. How they survived I don’t know but they were exquisite and a brilliant blue in colour. 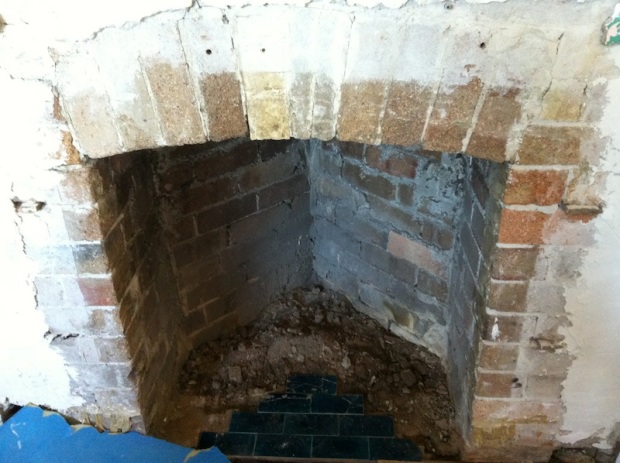 The handful of original tiles found hiding at the back of the fireplace.

I took to ebay to source an original fireplace and mantel and nabbed one from an inner city couple who were removing all original features from their tiny terrace. Sent shivers down my spine at the thought but at least this one didn’t end up as landfill. It weighed a bomb but I somehow managed to get it and the mantel into my trusty little hatchback! The pretty shabby cast iron was given a complete scrub-down, a few coats of rust prevention paint and then a lick of high gloss black paint and she looked as good as new.

Then it was time to fit it into place. The cast iron went in relatively easily but fitting the mantel proved a little more difficult. But with some patience and grunt work I eventually fixed it to the wall. The mantel was also peeling and coated in a thick layer of goo. It’s the only way I can describe it because I have no idea what was on it. It needed a good stripping back using a combination of heat gun and paint stripper, primer and paint. I also replaced the missing skirting boards either side of the fire with the reproduction ones I had made up for the dining room. 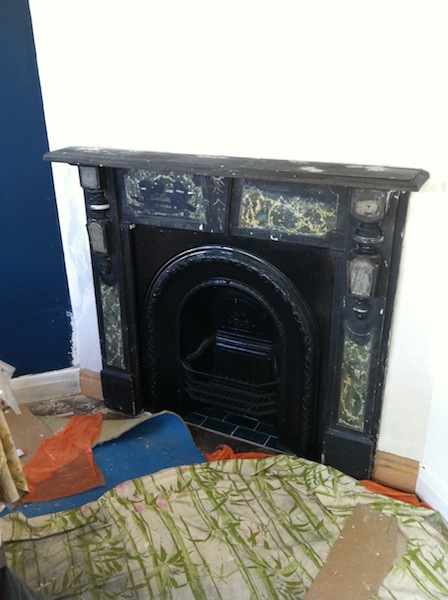 With a coat of high-gloss white on the mantel, she looked like she had always been there. I relaid and grouted the original blue tiles and luckily there were enough to cover the area visible to the room. While the chimney was still open, this wasn’t going to be an active fireplace.  Junk room she was no more!

And there she is – pride of place in the front bedroom