And the winner is… EBB

The dining room is probably one of the darkest rooms in the house. I wanted to create a cosy dining room without closing it in even more.

Yes, pink. Not a lolly-pop, girly, girly kind of pink but a more subtle and sexier pink. As with any colour there are thousands upon thousands of variations and shades but given I could picture what I wanted, I could narrow the field down considerably before I even started.

Still there were quite a few I was toying with. So I stuck the colour swatches to the dining room wall for a week or so. This allowed me to see them in a different light at different times of the day. You might not think it, but it helped cull the colours in a flash.

Only then did I get colour samples of the final two contenders. Certainly saved a lot of money only sampling two as opposed to 5 or 6.

And the winner was EBB by Resene. The shade seemed to change colour during the day from a muted pink to showing earthy undertones of mushroom. It had warmth without being dark and looked spectacular on the 12ft walls.

I chose to keep the wall opposite the window, that is, the common wall running the length of the house adjoining my neighbours, white. Almost a reverse feature wall. This would allow extra light reflection into the room.

I painted all the trims – skirting, picture rail, window frame, fireplace – in high gloss white to give a clean and strong contrast. 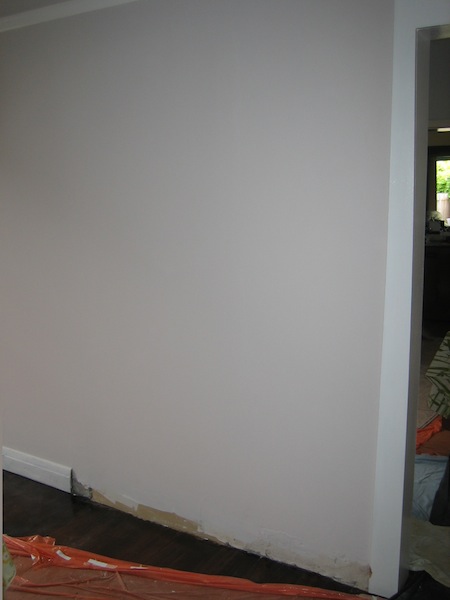 Just waiting for the new repro skirting to be fixed

Beautiful contrast to the white trims