One of the first tasks to do before I moved in was get the floors sanded and stained. But before I could do that, I needed to remove any unwanted stud/partition (i.e. non-supporting/structural) walls so that the original floorboards underneath the wall could be exposed.

The previous owners had converted the original dining room into a third bedroom by installing a stud wall and door. This sat between the lounge and the kitchen… as most dining rooms do for a house this age. 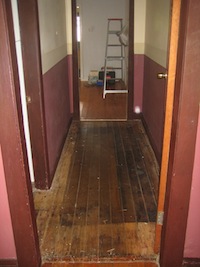 The dark corridor created by the stud wall on the left.

As you may know, usually the more bedrooms in a property, the better the resale value…So this posed the question – Do I remove the wall, reinstating the original dining room and thus eliminating a dark windowless corridor or keep the bedroom?

I opted for the sledge hammer! Opening it up would make the house seem bigger, let in more light and create a gorgeous dining room complete with roaring fire. And hey, it wouldn’t take much to reinstate the wall should I choose to in the future, so no biggie there.

Firstly, I had to dismantle the built-in robe fixed to the stud wall. This was done meticulously, with each panel and set of screws labeled. If I could get $50 for it on ebay, then that’s $50 extra in my pocket plus it would cost more to get rid of it. SOLD.

Removing the built-in wardrobe before demo of the wall behind.

The stud wall cut across the ornate original ceiling so there was a big chance that they had cut through the ceiling plaster to fix the new wall up through to the ceiling batons. This would have meant it almost impossible (or if not extremely costly) to fix given it was horse hair plaster and had lovely grape vines on it! But thankfully, they had glued the plasterboard to the ceiling. Go figure.

Then came what I like to call Therapy – one girl, one hammer and a whole lot of tension release. There’s something very therapeutic about attacking a wall with all the strength and might you can muster! 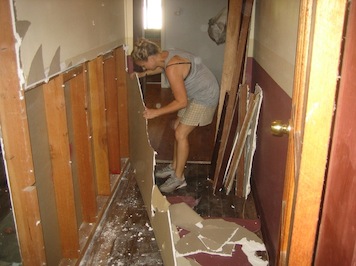 Removing the plaster board.

Let there be light!